Blog / Lawns / Now is the time to rehab that neglected lawn… 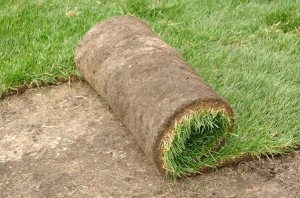 … and one of the first questions is “Seed or sod?”
Sod is high quality grass that’s field grown for about a year and harvested by a machine that slices a section of turf with very little soil attached. It’s typically sold in rolls that about equal a square yard and weigh 25 pounds or more depending on the moisture content, the first roll that you lay, that is. They seem to get heavier as the day progresses.

Preparation of the soil for sod or seed is pretty much the same. Make soil test, control weeds, till soil, add lime and, for sod, a high phosphorus, slow release fertilizer. (That’s to get the roots growing. You’ll add nitrogen later.)

The sod is laid with the edges tightly together, staggering the joints at the ends of the rolls so they don’t line up, something like laying bricks. On a hillside lay sod across the slope and use wire staples similar to croquet wickets to hold the sod in place. As you work, use a heavy knife or sharp spade to cut curves or around objects like fire plugs. Rolling isn’t necessary except in sandy soils.

Water the sod immediately after it’s laid and keep it moist until it’s established. Because the sod shades the soil you may be using less water than for seeded areas.

As noted, sod can be used on slopes where seed would wash off or erosion occur, can be laid almost any time of year and should accept normal traffic in a matter of weeks.

In my experience if you’re able to lift the sod and willing to spend the time sod is a practical do-it-yourself project. Alternatively, you may find that having it installed professionally is less expensive than you think.