Fall webworms began infesting local trees and shrubs in mid-summer! They create their unsightly webs at the branch ends of hundreds of different woody plant species, including sourwoods, birches, cherries, crabapples, hickories, and walnuts. If you saw web-building pests this past spring, they were likely the Eastern tent caterpillar.

What are fall webworms?
Fall webworms really aren’t worms at all, but the caterpillar stage of a white moth, Hyphantria cunea Drury. What you see is the larval stage of this pest consuming leaves inside the protection of an unsightly tent-like web. The damage they inflict may occasionally defoliate a tree but rarely kills it because the damage occurs shortly before normal leaf-drop. A relatively benign native of North America, these fall webworms are invasive pests throughout Europe and Asia.

Fall webworm lifecycle
The caterpillars currently feeding on your trees hatched from eggs laid by adult fall webworm moths. The small moth is fluffy white, sometimes with black spots, about 1½-inches long. After hatching, caterpillars feed for 4 to 6 weeks, creating a tent-like web as they eat tree leaves. They emerge from the web only when they are ready to pupate, seeking shelter in tree bark or other crevices on or in the ground. There they spin cocoons in which they spend the winter. Next spring, adult moths will emerge from these cocoons and mate—then the females will lay eggs, beginning the cycle all over again! Many of the webs you see now are empty because the caterpillars have already moved on to shelter for the winter.

What to do?
The webworms will devour the leaves within the web, but not the branches, so it is fine to do nothing! Birds, predator insects, and parasitoids help by eating moth eggs and attacking the developing larvae. The webs will deteriorate over the winter and the tree will refoliate in the spring.

If you prefer, when you first see the webs, prune away the branch tips holding them and destroy any active caterpillars, or pull the webs down with a stick—burning webs is not recommended! If you are concerned about the health of a young tree with a heavy infestation of fall webworms, contact the local Extension office for an approved insecticide recommendation for webs containing active caterpillars. Chemical control is most effective when the webs and larvae are still small.

What if I see webs in the spring?
Eastern tent caterpillars build the webs located in tree-branch crotches—rather than branch tips—in the spring. Found throughout the Eastern United States, they mostly affect apple, cherry, and crabapple trees, although they can attack other woody plants. Like fall webworms, tent caterpillars are the larval stage of a moth (Malacosoma americanum) and spin a web for protection.

Tent caterpillar life cycle
Unlike webworms, Eastern tent caterpillars overwinter as egg masses on trees. As the larvae hatch, they form tents in branch crotches. They leave their nests during the day to feed and return at night. They pupate in cocoons on trees or other nearby structures. The reddish-brown moths that hatch out in early to mid-summer have two white stripes on their wings. After the moths mate, females’ egg-laying begins a new cycle.

Eastern tent caterpillar control
While the tents are unsightly, tent caterpillars seldom permanently damage trees, unless the new leaves are stripped year after year, or if a young tree is completely defoliated. Typically, trees refoliate within weeks of this spring damage. If you spot the egg masses, prune and destroy them. You can remove the nests with a stick and crush any live caterpillars—this is best done in the evening when the larvae return to the nest. As with webworms, controls work best when you first spot those tents! 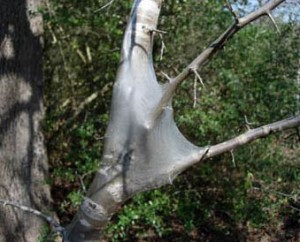 Any time now, depending on nature’s whims, many of our trees will be hosting the tents of the native Eastern Tent Caterpillar. This handsome black caterpillar with white, yellow and blue markings is not related to gypsy moth caterpillars, with which they are sometimes confused.  Last fall the female, a small, brown moth, laid her eggs on the branches where they overwintered as a firm brown mass.

The trees and the caterpillars have coexisted for centuries and both survive so for a mature tree it’s not a panic situation. New leaves will grow back after the caterpillars leave in late spring but defoliation of a small tree for several years could weaken it.

If you need exercise, prune or simply pull the nests out of the tree.  Do this on a cloudy day or in the morning when most of the caterpillars are still in the nest.

Do not use a torch to burn the nests!  This can do more harm to the tree, the torch bearer, and the surrounding property than the caterpillars will.

In the fall we’ll be seeing similar nests located at the end of the branches, not in branch crotches.  These are the offspring off the Fall Webworm, a smaller, darker, and hairier nonnative.  Again, because by this time the tree will already have completed its growth, the damage is more cosmetic than systemic. Not to worry.