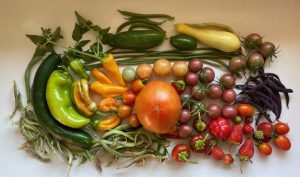 Your vegetable garden is likely approaching peak production time—but when and how to harvest? Even if you are a pro, here’s how to make sure those caring for your precious crops while you’re away know when to pick!

What matters about harvest time?

Things to look for when you harvest

Harvesting takes more time than you’d expect—look carefully for items to pick amongst all those leaves and vines. This makes harvesting a great time to give your garden plants a quick check-up!

In WNC, most vegetable garden plants are annuals, or treated as such, so when you harvest, evaluate when it’s time to pull the whole plant—it may be too risky to ask short-term caregivers to make this decision!

When to harvest specific crops: https://content.ces.ncsu.edu/extension-gardener-handbook/16-vegetable-gardening#vegetableharvestingguidelines

Just inside from harvesting vegetables, I heard yelling from the kitchen. She was staring at a freshly washed cucumber in the sink. Sprouting from it were green projections that were alive and wriggling! This was our introduction to the insect pest with the unique name of pickleworm.

These critters are the larvae of the pickleworm moth (Diaphania nitidalis), which overwinters in Florida and becomes a late summer pest of cucurbits (not only cucumbers, but summer and winter squash, pumpkins, cantaloupe, and watermelons) in Western North Carolina.

Once the moths arrive in our area, they lay eggs on cucurbits, which hatch, go through several larval stages, pupate in the plants’ leaves or in the leaf litter, and become adults in less than a month! This short life cycle means we may see two or even three generations of pickleworms a year.

The larvae can feed on flowers, leaves, and vines, as well as fruits. Larvae eating blooms can prevent fruit set. Like squash borers (Melittia cucurbitae), in the worst-case scenario, pickleworm larvae feeding on the vines can kill your plants. You may see pickleworm excrement (frass), or simply small holes in your fruits. In both cases, your crop is ruined once the larvae are feeding because the damaged areas with start to rot. According to University of Florida’s John L. Capinera, cantaloupes, with their thick skins, may have external damage called “rindworm.”