Gardening in the Mountains presents:
Controlling Garden Wildlife—Voles and Moles

Learn about unwanted garden inhabitants—voles and moles—in this 30-minute video.  Phil describes the differences between these two garden pests, including their physical characteristics, habitats, and “dining” preferences.  He shares a variety of methods gardeners can use to minimize plant damage and make the landscape less hospitable to this nuisance wildlife.

Or go to www.buncombemastergardener.org, click on the ‘Gardening Videos’ tab at the top of the page, and select the video from the list provided.

“How do I control moles and voles in my lawn and garden?” Now is the time of year our Extension Master GardenerSM Helpline is flooded with this question! If your lawn and garden is riddled with holes, lines of raised earth, or volcano shaped-hills, then you have either moles or voles! These critters have been with us a long time, though, so you need to consider your threshold of frustration and commitment in planning your strategy to deal with them.

Mole or vole? Take the quiz.
If you can correctly answer all five Mole/Vole questions below, you don’t need to read this article—unless you want to find out how to get rid of them!

Key mole/vole differences
Before you can formulate a “good riddance” strategy, you have to know “what” you are trying to get rid of!
Appearance: The most obvious difference between a mole and vole is shoe size! Moles have BIG paddle-like feet (think clowns). Voles have dainty mouse-like feet (think Cinderella).
Habitat: Moles build volcano-like hills (molehills!) at tunnel entrances. Voles make 1- to 2-inch holes level with the ground.
Feeding behavior: Moles eat insects, grubs, and earthworms. Voles eat plant parts—roots, bulbs, and tree bark.

More about moles
Three species of moles live in Western North Carolina: eastern moles (Scalopus aquaticus), hairy-tailed moles (Parascalops breweri), and star-nosed moles (Condylura cristata parva). In addition to big paddle-like front feet designed for digging, all these moles have very small eyes, hairless snouts, and ear openings hidden by fur. They are 4 to 6 inches long and tend to live alone underground, so you will typically find only 3 to 5 moles per acre, even in a heavily populated area. Star-nosed moles are a protected species that live in wet, marshy areas and can eat underwater. Eastern and hairy-tailed moles are more likely the moles that you’ll find making tunnels with visible ridges, especially in lawns.

Mole control
Moles can eat up to 100% of their body weight a day, so may be considered garden helpers if you don’t mind their tunnels! If you want to eliminate moles, however, the fact that star-nosed moles are a protected species means that North Carolina has not approved pesticides to kill moles. The North Carolina Agricultural Chemicals Manual recommends using a spear-type trap for non-protected moles—or a ground insecticide to kill soil grubs. Killing grubs still leaves other insects and earthworms for the moles to eat, so it may not be effective. If you go the insecticide route, be sure to follow the directions carefully and take all recommended safety precautions.

Repellents may help but need frequent reapplication. Folk remedies, such as mixing gum or glass shards in the soil, are not effective! Walking on the tunnels may bring you some satisfaction and frustrate the moles. Hiring a professional with the required licenses may be the best bet; see Wildlife Damage Control Agents in Buncombe County.

More about voles
North Carolina has two species of voles—the meadow vole (Microtus pennsylvanicus) and pine vole (Microtus pinetorum). They look like mice with stocky bodies, short legs and tails. They have small black eyes and furry ears set close to the head. The big difference in appearance between mice and voles is that mice have long tails and voles have very short tails with hair.

Unlike moles, voles like to live with other voles. A burrow system can have several adults and babies. Even though voles only live 2 to 16 months, they breed throughout the year with a gestation period of only 21 days. They can have up to 6 litters of 2 to 4 babies per litter!

Voles are a big problem for North Carolina home gardeners. They eat roots, bulbs, rhizomes, stems, and bark. Pine voles tend to do damage below ground, while meadow voles can girdle—gnaw the bark in a circle—tree and shrub trunks at ground level, causing damage to orchards, ornamentals, and trees. Mowing grass and weeds and removing mulch from within a foot of tree and shrub trunks will help prevent vole damage. Use the “Apple Sign Test” as described in “Voles in Commercial Orchard and Ornamental Nurseries” to determine if voles are present: https://content.ces.ncsu.edu/voles-in-commercial-orchard-and-ornamental-nurseries 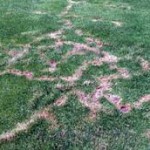 For years the control of moles in our turf has been an area of confusion for homeowners. In North Carolina, the mole has not been considered a game animal suitable for hunting so there has been no open hunting season on them. Home -owners with mole-caused damage could apply for a permit to hunt moles, generally with a trap, or hire a licensed Pest Control Agent to do the job for them. Unfortunately, many choose to ignore the law entirely.

Due to some recent changes in North Carolina pesticide laws, it is now legal to use specific chemicals to control moles in turf, homes, golf courses, etc. However these chemicals cannot be used in pastures or within 100 feet of natural or man-made wetlands, or bodies of water. Elevations of 4,000 feet or higher are not permitted as well.

Currently manufacturers are submitting their products for registration. Some have already been approved and may be available in local garden centers or suppliers.

If you feel the need to use one of these chemicals, check with your local garden centers for applicable inventory. READ THE LABEL before you buy to make sure that it is one of those products approved for use in controlling moles in North Carolina by homeowners. (Some products have been approved only for use by licensed professionals or for the control of rats, not moles.) Look too for other warnings or restrictions on the label. Are you comfortable how the material is it to be applied? Look for other signals or cautions. For example, the new label may warn that the active ingredient is also toxic to canines so you’d obviously want to take special precautions around dogs. 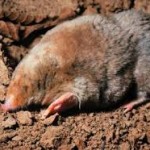 It’s safe to say that even with these new products hunting moles will not be easy. As with a trap, you still must find an active molehill, runway or tunnel in which to place the poison or the smoke generator. Just any old runway won’t do.

In the final analysis, you may decide that the mole, and there probably is only one, is doing you a favor by aerating your lawn, and choose to let nature take its course.