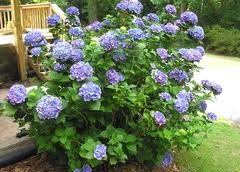 Dive into the varied forms and attributes of the popular and diverse world of Hydrangeas. Irene Palmer, with the NC State Mountain Crop Improvement Lab in Mills River, NC, will take us on a journey to explore how selective breeding has transformed these charismatic garden champions. Learn about garden standards, new varieties and the best care and maintenance you can provide to help them thrive.

Registration: The talk is free but registration is required. Please click on the link below to
register. If you encounter problems registering or if you have questions, call 828-255-5522.

Zoom seminar access: After registration, you will receive an email with instructions and a link to join this online live broadcast via Zoom. The ability to access Zoom through a computer, tablet or smartphone with a reliable internet connection is necessary to attend.

Walking amidst “Munchkin,” “Ruby Slippers,” and “Snow Queen” at a local plant nursery, I wondered if I had wandered into some magical land “over the rainbow.” I was in the section of the nursery dedicated to hydrangeas!

Hydrangeas include more than 75 species of evergreen or deciduous shrubs native from Asia to North America. They are widely grown, relatively pest free, and require minimal annual maintenance. Consider including them in your landscape design—they will bring you multi-season enjoyment.

Learn more
It’s All in the Soil! The Chemistry Behind Hydrangea Colors
YouTube video from the American Scientist

Prune hydrangeas at the wrong time and you snip off the season’s blooms.
by Glenn Palmer, Buncombe County Extension Master GardenerSM Volunteer

Late winter is pruning time for many trees and shrubs, but the majority of questions we receive relate to hydrangeas. When to prune depends on the type of hydrangea you have. Here are some guidelines:

Bigleaf and lacecap hydrangeas; Hydrangea macrophylla: This common hydrangea usually has pink or blue flowers, the blue shades a result of more acid soils. For a mature plant, remove the dead wood in late winter by cutting those stems to the ground. This will allow access to more air and light. Any other pruning should be completed after the flowers fade—not earlier than July; no later than the first week in August. Later pruning will destroy flower buds developing into the next blossoms.

Smooth hydrangea; Hydrangea arborescens ‘Annabelle’: Because of its untidy growth pattern most gardeners annually prune the entire plant to 6-12” from the ground. This should be done in late winter as the flowers appear on the current year’s growth.

Peegee hydrangea; Hydrangea paniculata grandiflora: Develops into a large shrub producing many smaller blooms. In early March, severe pruning, cutting back to only two buds at the base of each stem, will produce a smaller shrub with larger flowers on current year’s growth.

Oakleaf hydrangea; Hydrangea quercifolia: Native and generally left to grow its natural form. Blooms for a long period on last year’s growth. Any pruning should be done as soon as the flowers begin to fade.

For most woody plants, follow this rule: “If the plant blooms early in the season on last year’s growth, prune after it blooms—not now!” (Forsythia, for example.)

If the plant blooms later on growth that occurs this year, do only limited cutting now. Wait until after the blooms have faded before major pruning.