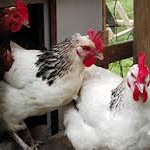 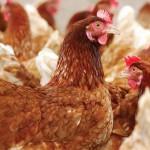 With their beautiful feathers, plucky personalities and tasty eggs, who wouldn’t love chickens? Before I got my ‘girls’, I envisioned them roaming over my garden, gently pulling weeds from amongst my flowers while gentle music played. Well, maybe not the music. The reality turned out to be much more earthy.

Chickens do eat weeds. They also eat vegetables, herbs, flowers, both perennials and annuals, and all living creatures smaller than themselves. They turn over the soil looking for insects and worms, which aerates the soil but can disturb plant roots. And chickens love to take baths. Not ones with soap and water, but dirt baths. The first time I observed this, I thought my chicken was dead. She was lying half on her side in a slight depression with dirt on and around her. They do this to rid themselves of mites and to find cooler soil, particularly under a shrub, on a hot day. Needless to say, they dig among the roots of the plant.

Fencing makes keeping chickens and gardening more compatible. Either letting the chickens roam in a limited area defined by temporary wire fencing or fencing off areas of the garden that must be kept chicken free. Some gardeners let their chickens roam in the vegetable garden area during the winter, letting them turn over the soil and deposit rich droppings that enrich the soil for the coming growing season.

My chickens are no longer free range. Living outside the city, we have a healthy population of predators. The chicken coop itself was built using ¼ inch screening instead of larger chicken wire. Placing it under, around, and above the coop has kept anything from digging, climbing or crawling through. The only intruder has been a bear that ripped the door off to reach the sweet-smelling chicken feed. That day the chickens roamed free. 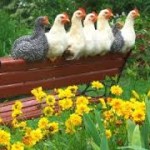 While roaming in the garden, Vesta and Lucille, two of my first three chickens, were eaten by hawks. The last, Walline, lonely on her own, went to live with a chicken-keeping friend. My next three, cumulatively called the girls, are not allowed outside the coop. Although it has been several years since the first batch met their fate, the hawks still patrol our property daily.

Our chicken coop floor is lined with a thick layer of pine bark mulch that is changed every few weeks. The smaller hen house, the elevated enclosed part of the coop where the chickens lay eggs and roost at night, is lined with wheat straw, which is changed daily. Rich with chicken droppings, this goes into our compost pile along with green yard and kitchen waste. The chickens’ greatest gift to our garden is their manure that helps produce rich compost that builds great soil.

I love my chickens. If considering chicken-keeping, first check with your town or city to see if they are allowed, and then do your reading.