The tiny WNC native bee
I recently remembered the tiny mason bee (Osmia lignaria)—an insect native to Western North Carolina—while looking for a project for parents or Scout leaders to do with children. These busy pollinators hatch out around this time of year and get to work on the earliest spring blooms. They are especially at home in orchards, but pollinate wildflowers, azaleas, and other flowering shrubs, as well as fruit trees. They are said to pollinate faster than honeybees, and after 4 to 6 weeks of activity, they’re gone!

Homes for mason bees
The solitary mason bees do not live in hives. In the wild, they use hollow brambles or stone crevices. Females gather mud to form cells in which to lay their eggs. Each cell contains pollen and nectar to nourish the egg. The eggs will hatch the following spring. You’ll see mason bee “homes” for sale in garden catalogs, some for as much as $50. These homes are either chunks of wood with small holes drilled into them, or shelters with short lengths of  bamboo cut and stacked inside.

Make a mason bee house
When I was a kid, I made mason bee houses from an empty can and paper straws. So I thought I’d try it again to see if it was as fun and easy as I remembered.

Start with a coffee can
Start with a small coffee can—a good size for the bee’s 6- to 8-inch-long nesting tubes. Wash the can thoroughly and dry it in the sun to get rid of the coffee smell. Use a can opener to make a triangle opening on the bottom. I spray-painted the can and gave it a day or two to dry.

Construct nesting tubes
The next step is to create the nesting tubes. Use paper straws—not plastic,  which can mold and infect the nest. You can make your own straws using baking parchment paper. Roll the parchment around a pencil and fasten it with school glue.

Small diameter bamboo canes are an alternative to straws. Cut them into 6- to 8-inch lengths, making sure the edges are smooth and there are no knots in the bamboo, because Mason bees have very delicate wings.

Hang your house outdoors in February
Hang your house near an early-blooming tree, shrub, or flower. Make sure the home is in the sun, at least 3 feet off the ground, and stable. The bees will not use a house that swings in the wind.

Find a protected place for safekeeping
After the bees finish nesting in late June, take down your house and put it in a safe place until February. A cool, dry place, like an unheated garage, shed, or basement is perfect. The paper tubes are delicate and will likely collapse if left out year-round. Even houses with bamboo tubes should be brought in to keep winter-hungry birds from devouring your bees. Next year, put the tubes back out in the sun and wait for the bees to emerge.

Mason bee facts
– Male mason bees hatch first, wait around for the females, then die soon after mating.
– Mason bees rarely sting unless trapped underfoot or inside clothing.
– The bees will not reuse the straws or bamboo tubes. If you want to hang another house next year, you will need to replace them.

Author’s note
You may have heard about the decline of honeybees. Scientists are trying to understand the reasons for hive collapses and find solutions. Unfortunately, our native bee species are having difficulties, too. Providing safe habitats is one way to give them a helping hand.

Resources
How to raise and manage orchard mason bees for the home garden:
https://www.ces.ncsu.edu/depts/ent/notes/Other/note109/note109.html 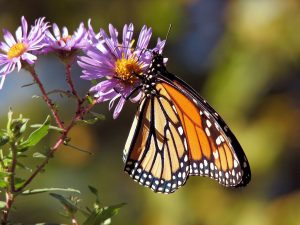 We all love butterflies! They are like a puff of magic flitting around the garden.

Help feed the butterflies in your garden.

Put out a plate with sliced oranges or strawberries or a splash of a sugary drink. Just be sure to use a very shallow dish to keep the butterflies safe from drowning.

Spend time this year learning more about butterflies. Visit the Quilt Garden at The N.C. Arboretum (www.ncarboretum.org/) to look for butterflies. If you are in Durham, drop in at the Magic Wings Butterfly House at the Museum of Life and Science to see one of the largest butterfly houses on the East Coast (http://www.lifeandscience.org/magic-wings). Go to Friends of the WNC Nature Center website (http://www.wildwnc.org) to learn about plans to build a butterfly garden at the WNC Nature Center. Discover ways to encourage butterflies in your own backyard at http://content.ces.ncsu.edu/butterflies-in-your-backyard.

(Resources used for facts about butterflies include the North American Butterfly Association at http://www.naba.org and the Lepidopterists’ Society at http://www.lepsoc.org/education.php which has an educational resources section for K-12 students.) 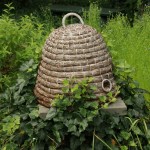