Blog / Wildlife / Snake in the Garden

The snake lies coiled, aware of me long before I see it. Only feet away, I have been lost in the summer heat, weeding a rocky slope, my mind miles away. Catching it out the corner of my eye, I scream and jump backwards simultaneously. Now what?

My first impulse is to grab a shovel and kill that snake. Instead, I reach for my phone, and take its picture to identify it later. Then I back away, allowing the snake to move along.

Western North Carolina has many snake species. Only two, the timber rattlesnake and the copperhead, are poisonous. These two, both pit vipers, have hollow fangs to inject a large amount of venom into their prey when hunting, but in defensive strikes often release no venom. A pit viper bite produces one or two puncture wounds, while nonvenomous snakes‘ small teeth make only horseshoe-shaped scratches.

Pit vipers have small pits on their heads between their eyes and nostrils that serve as “heat detectors,” to help sense prey. Another identifier is their triangular-shaped head. Some nonvenomous snakes flatten their heads into a triangular shape when aggravated, however. Another complicating factor in identifying snakes is that juveniles can look different from the mature reptile.

Snakes eat many creatures that gardeners don’t want around, including rodents, insects and smaller snakes. Being part of the food chain, they are also food for some birds. I have a large resident black snake in my stone wall that helps keep the chipmunks, moles and voles in check. 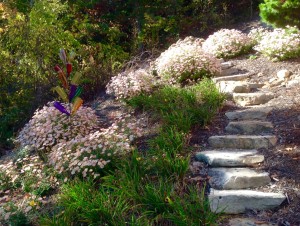 So, instead of killing that snake in your garden, consider leaving it alone; 80% of bites occur when trying to kill or handle a snake. When gardening, be aware. Turn over rocks with a long handled implement and use a hoe or shovel to check around grasses or shrubs while working. Keep lawns mown and weeds under control. There is no need to be afraid, just be observant.