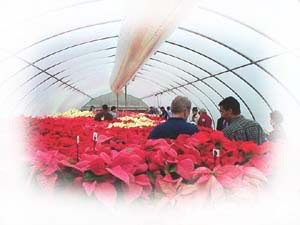 Statistically, poinsettias are the bestselling of any potted flowering plant in the United States. Total yearly retail sales add up to around 144 million dollars, with North Carolina being second only to California in sales.

Poinsettia (Euphorbia pulcherrima) is of the spurge family and is native to southern Mexico and Central America, growing in the deciduous forests at moderate elevation. In its native habitat, it will grow to 15 feet; the leaves were used by the Aztecs as a dye and the sap as a medicine.

Poinsettia supposedly got its Christmas orientation in the 1600s when priests sent young girls out to gather flowers to place around a nativity scene. The plant was introduced to the United States in 1825 by Joel Poinsett (hence its American name). Poinsett, an amateur botanist and the first ambassador to Mexico, sent cuttings back to his plantation in Greenville, SC.

Contrary to popular belief, poison control centers have determined that the plant is not poisonous. There are some skin irritating components, but none are serious. 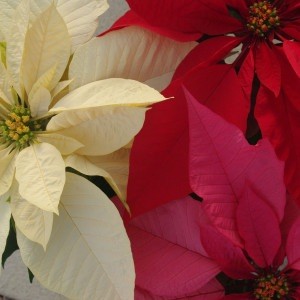 Modern breeding, which did not begin until the 1950’s, has produced over 100 different cultivars with colors of varying shades of red, pink, white and spotted bracts (or modified leaves). Modern cultivars will hold the leaf color for a fairly long period of time and will live for extended periods of time if well-tended.

Caring for your holiday poinsettia is easy. The average household temperature will be sufficient, and lighting from a window will sustain the plant in the winter months. The plant should be watered only when the top part of the potting soil is dry. Overwatering is not a good thing. 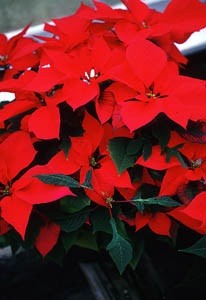 To extend the life of your poinsettia and to regain color for the next year is much more time-consuming, but it can be done. This winter, continue to care for your poinsettia until after the last frost, and then move it outside, remembering not to overwater. Introduce the plant to brighter light in increasing increments, as the leaves will burn if moved directly into the sun. Maintain during the summer as any potted plant. Around the first of October and before first frost, move the plant inside. To obtain bract color, the poinsettia will require 13-14 hours of TOTAL darkness every day for about 2 months. The remaining 10-11 hours a day should be the brightest light that is available. Any introduction of light during the darkness hours will retard color development. It’s probably easier to go to your favorite nursery and purchase a bright-colored, beautiful poinsettia grown under controlled conditions in a greenhouse.