Blog / Flowers / Roses / Are Knock Out roses really the easiest roses to grow? 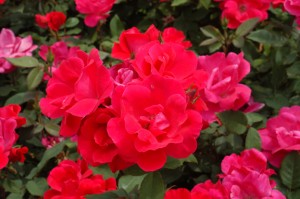 Actually, Knock Out roses are akin to hit movies — they are showing everywhere, there are many “sequels” and they are even spawning merchandise capitalizing on their name. Resistant to black spot, these roses have a long blooming season, without the need for deadheading. They are relatively heat and cold tolerant, making them admirable performers in much of the United States. That said, they are shrub roses, not a new species, and benefit from the same care as other shrub roses, such as proper planting, fertilizing and annual pruning.

The first Knock Out rose, bred by William Radler, received an All American Rose Selection award in 2000. A whole family of other Knock Out roses — a double red, pink single, pink double, as well as Blushing, Rainbow and Sunny varieties now join the cherry–red, single-flowered original. These may differ in some ways besides flower form and color. The yellow Sunny Knock Out, for example, is the only fragrant Knock Out rose, and may get a little taller than its relatives.

Although Knock Out roses are black-spot resistant, Arkansas Cooperative Extension Service researchers report them susceptible to less familiar rose diseases, such as rose Cercospora leaf spot, which causes leaf yellowing and premature leaf drop. With the arrival of rose rosette disease to North Carolina, many Knock Outs have succumbed, perhaps because they are used in many home landscapes, as well as in mass plantings, making it easier for mites to spread this viral disease.

If the Knock Outs have given you courage to grow roses, branch out and make your landscape your own! If you want low maintenance, look for other varieties that do well without extra care. These include many older rose varieties, such as the small rose “The Fairy,” shrub roses, such as “Care-free Beauty” and even large climbers, such as “New Dawn.”

Give any rose at least six hours of sun in soil with a pH of at least 5.5; don’t overdo lime. Fertilize with balanced fertilizer from early spring to August. Keep watered and mulched. Prune your roses in early spring, removing dead, diseased or crossing shoots.