Q: How do I overwinter a gardenia that I have had on the patio all summer?

A: There seems to be general agreement in the references I could find, but the most complete reference that I found on gardenias was the Reader’s Digest Success with House Plants. 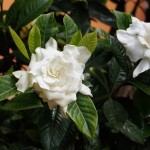 Gardenia jasminoides comes from China and normally blooms in early summer. It prefers an acid soil and is accustomed to coolish but not cold winters. It doesn’t go fully dormant, but slows down and can survive occasional temperatures slightly below freezing. That adds up to treating it as a house plant in our area. Bring it inside and keep it in bright but not direct sunlight and let it dry out a bit between waterings.

Apparently the winter temperatures influence the setting of buds, so if you want flowers next summer keep the thermometer between 60 and 65 degrees. Or, if you want to delay blooming until next winter, which would be after you’ve brought the plant inside again, you can pinch off the buds as they develop next spring and early summer. 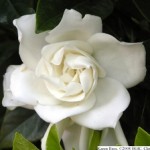 As I was working on this question we had a visitor in the Master Gardener office who has been raising gardenias for years. Her plants spend the summer on a covered porch and the winter in the living area. She leaves their pot standing above a shallow tray of water and feeds an African violet fertilizer. For pest control she uses insecticidal soap. Her gardenias bloom sporadically throughout the year.

You can see that her recipe is a little different than that of the book but it seems to work for her. And that’s the way gardening is: sometimes more an art than a science.