One of the signs of Spring on our Master Gardener hot line is the question “What are those lovely purple-flowered trees we see along the highways?”

There are really two possibilities, the most likely being the Princess Tree, Paulownia tomentosa.  This tree can quickly grow to as much as 60 feet and is not at all demanding as to moisture or soil. That’s why we typically see it in locations where the soil has been disturbed and little else is growing.

Paulownia flowers are borne on erect panicles that grow upward. Each of those flowers produces a capsule that contains literally dozens of light, winged seeds that are widely disbursed by the wind. That explains how they reach high on the cliffs in the rocky gorge of  I-40 west toward Tennessee, for example.

Not only does the question arise on the Master Gardener helpline!  Apparently it is a frequently asked question of the staff of the NC Welcome Center along I-40. Prominently displayed on the doors of the welcome center are signs that tell what they are and that they are not native to NC.

The flowers of the other possibility hang downward in showy clusters and that’s an oriental Wisteria, Wisteria sinensis.  This is a vine but when it climbs and envelops a tree it can easily be confused with Paulownia, being about the same shade of violet or purple.   Your answer then is to check the arrangement of the flowers.  Growing upward equals Paulownia, hanging down, Wisteria. 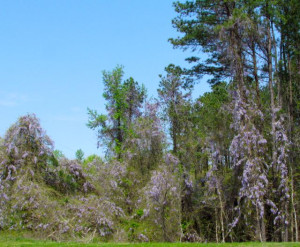 Paulownia, by the way, is the “Miracle Tree” you see advertised for its flowering beauty, rapid growth and tough constitution.  However it really doesn’t make a good landscape tree as It has weak branches and  produces a lot of litter as leaves and seedpods scatter later on. Both, Paulownia tomentosa and Wisteria sinensis, are listed by several states and the US Forest Service as being invasive, definitely not the kind of plants you want to bring home to meet the family. 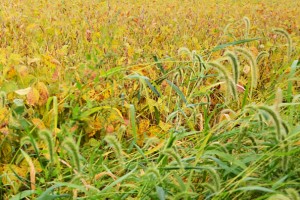 Hiking through two different local areas this past  weekend,  I’ve observed frightening arrays of young, but obviously fast growing plants of various  species, by far the majority  of them not native.  I saw masses of oriental bittersweet, miniature forests of  Chinese privet and burning bush along with gross stands of non-native lespedeza.  And most surprising, even new clumps of English Ivy with its small, shiny new leaves.

The winter of 2013 will go down in history, not just for its relative mildness  and copious rainfall, but for the unleashing of a renewed onslaught of invasive plants.

Any homeowner or property owner ought to take a stroll over their property, particularly fence lines and  the edges where shady forest or dense brush meets the sunlit corridor of a roadway. That’s where birds congregate to enjoy their lunch of berries and other fruits, but leave behind the indigestible but very viable seeds.

For help in identifying the plant and determining appropriate control measures contact your local Cooperative Extension Service.  Unfortunately, just pulling the plants often leaves behind a fragment of root which is enough to emerge as a new plant. A chemical attack may be suggested.

This is the time of year when people ask what are the purple flowered trees  “we see along the highway?”

There are two possibilities, the most likely being the Princess tree, Paulownia tomentosa. The other possibility is Oriental Wisteria, Wisteria sinensis.

Native to China, the Paulownia tomentosa  (common name being princess tree or empress tree)  is a fast-growing, deciduous tree that is primarily grown for its profuse spring bloom of foxglove-like flowers and its large catalpa-like green leaves. It was first introduced into the United States in the mid 1800s, and has since escaped cultivation and naturalized in many areas of the eastern U.S.   It is an upright to spreading deciduous tree that typically grows to 40’ tall with a rounded crown.    It is noted for its profuse bloom of fragrant, tubular, funnel-shaped, pinkish-lavender flowers (to 2” long) with interior dark purple spotting and creamy yellow striping.   Flowers appear in spring in clusters (to 14” long) before the foliage.   Flowers are followed by oval, woody, dehiscent seed capsules that emerge sticky green and ripen to brown in fall, at which point they split open releasing abundant, very light winged seeds that are widely dispersed by the wind, which is why we see them growing high on the cliffs in the rocky gorge of Interstate 40 west toward Tennessee, for example.   According to the US Forestry Service, in the Great Smoky Mountains National Park and Linville Gorge Wilderness Area, the Paulownia’s ability to colonize rocky or infertile sites makes it a threat to rare, endangered species of plant life that require these marginal habitats.  Paulownia is often advertised as a “miracle tree” for its flowering beauty, rapid growth and tough constitution.  However, its weak branches and messy habits make it unwelcome in the landscape.

Wisteria sinensis (Chinese wisteria) is a woody, deciduous, perennial climbing vine, native to China.   While the plant is a climbing vine, it  can be trained into a tree-like shape, usually with a wavy trunk and a flattened trunk.   The flowers hang downward in showy clusters.   The wisteria was introduced to North American in 1816 and has secured a place as one of the most popular flowering vines for home gardeners due to its flowering habit.    However, it can be weedy and has become an invasive species.

Although, wisteria sinensis is a vine, when it climbs and envelopes a tree, it can be easily confused with Paulownia, being about the same shade of purple or violet.   Both Paulownia and the oriental Wisteria are considered invasive plants, definitely not the kind of plants you’d want to bring home to meet the family.