“These store-bought flowers are okay. But they are never as beautiful as the ones you give me from your garden,” my next-door neighbor said a few weeks ago, as she arranged a mixed bouquet from the grocery store. It was her get-well gift to me following foot surgery.

I had never thought of my flowers as noteworthy. They are what they are because I am a nonchalant gardener. Between competing interests, age, and arthritis, I don’t have time to pamper them. So, I stick with hardy, reliable, old-fashioned perennials. Among them are two – gladiolus and dahlias — that conjure up fond memories of summers spent at Old Lodge Farm, my Canadian grandparents’ home outside Aylmer East, Quebec. My grandparents grew neither, but George and Alma Fuller did.

My family would often stop by the Fullers’ farm for a visit and a cold drink of water from their pump before continuing our trek down to the Ottawa River’s rocky shore. Behind the cat-populated barn, Mr. Fuller grew vegetables and rows of gladiolus. Every week he loaded his produce and flower stalks onto his Model A truck and drove to Ottawa’s Baywater market. For her part, Mrs. Fuller tended a bed of dahlias in front of the house. The dark brown, weathered wood provided the right backdrop to showcase their brilliance. Because of the Fullers, I fell in love with glads, as George called them, and dahlias.

Despite being a flower that is slightly out of favor, glads have had a place in my garden for years. They’re easy to grow and never disappoint. Loosely arranged in a tall vase, they make a statement. Dahlias, on the other hand, were forgotten until my father planted them in the late 1990s. He and my mother had moved here from Ithaca, New York, following his retirement from Cornell. In the years that followed, he delighted in Asheville’s longer growing season, planted rhododendrons that never would have survived Ithaca’s winters, had a love affair with hostas, and in his late eighties, discovered dahlias. At the time, I was a wife and mother with a career. While I appreciated his octogenarian enthusiasm, I didn’t have the time or the energy to participate in it. Now, I do.

Here’s the thing about dahlias. When the black-eyed Susans look tired, and the crocosmia have gone to seed, and the Shasta daisy petals are tattered, and the gladiolus have bloomed themselves out, dahlias are coming into their own raucous glory. They thrive in cooler temperatures, one reason why Mrs. Fuller’s were so magnificent. But these fat tubers should come with a warning. Beware: they will take over your life.

The temptation to buy starts with spring catalogs showcasing the latest sumptuous color palates. Against my better judgment, I wonder whether I can fit in just a few more. The answer is no. I have more than I can say grace over. This became painfully clear in 2021 when illness and injury prevented me from properly staking them. I lamented my inability to care. A neighbor’s plot was a constant reminder of my neglect. While its well-supported dahlias stood tall and straight, mine sprawled against the fence. Others, out of desperation maybe, supported one another. I came to the sad conclusion that this was the year I would have no fall dahlias to share. How wrong I was. My dahlias produced an abundance of lush, colorful blossoms until the first frost.

So why does my neighbor extol the virtues of my ordinary, old-fashioned flowers? Could it be that perfection is over-rated? To be clear, I have never aspired to produce award-winning flowers. Could it be that after living with the fear and isolation imposed on us by the Covid-19 pandemic, an unexpected homegrown bouquet is a reminder that not everything has changed?

I won’t be gardening until May this year. By that time, I will be walking again. The dahlias will be sprouting, and it will be clear how many survived the winter. Some rearranging will be needed to make room for a raised bed. This will provide an opportunity to divide and share the tubers. Unlike other years, I won’t bemoan my late start. This year, I will take my time, thankful that a gifted surgeon made it possible for me to return to what I love doing. This year, I will fertilize and snip and stake, knowing that perfection isn’t what’s important. This year, I will garden knowing that my dahlias are resilient, and so am I. 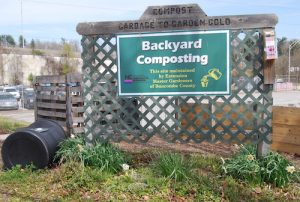 When to Visit?
The site is staffed and provides demonstrations from 10:00am to 1:00pm on the second Saturday each month, April through September.

What Will You See?
There are five different composting methods on display at the site. There is a single bin unit, a tumbling composter, a wood pallet bin and a classic 3-bin system — we also usually bring an example of vermiculture on each demo day.  The site is stocked with informational pamphlets on the how-to and why of composting and they complement the information available in the composting video on this website. Click here to view the video: Making and Using Compost at Home.

Fickle Days of Winter
A teaching moment in my garden was learning about Western North Carolina’s interesting and sometimes challenging transition to spring. My first gardening year in WNC provided several days of 75-to-80-degree weather in February. Since my new neighborhood was fully bursting into bloom and I was eager to get into the garden, I happily started my early spring gardening activities. Much to my chagrin, I soon learned about the multiple stages of winter in WNC, including Blackberry Winter. I now know that it’s best to wait until Mother’s Day to install tender plants here. My lesson:  Be wise. Be safe. Pause and do a little research before jumping into any new gardening activity.
By Catherine Pawlik, Extension Master GardenerSM Volunteer

Supporting Nature’s Food Web
A teaching moment in my garden occurred when I witnessed some birds feeding on sawfly larvae which were feeding on my red twig dogwood. I had been hand-picking the pests for years, not realizing that they were natural food for the birds visiting my yard. I have since discovered that sawfly larvae are also food for lizards, frogs, ants, predatory wasps, and other beneficial insects. While other gardeners may not tolerate a defoliated red twig dogwood in late summer, I’ve decided to accept it.

There are many different species of sawflies—pine, dogwood, elm, rose, hibiscus, and others. Species are host-plant specific, meaning the dogwood sawfly isn’t going to migrate among host plants to attack pines. Although no one wants their prized thunderhead pine stripped of all its needles, a gardener may decide to ignore sawfly on an otherwise healthy red twig dogwood. Most plants will survive an onslaught of sawflies unless the infestation becomes very severe.

Watching the birds devouring sawfly larvae taught me a lesson:  Pay close attention to how my garden supports a complex food web. Plants provide food and habitats for all kinds of animals—insects, spiders, butterflies, beetles, birds, squirrels—which in turn become part of nature’s food chain. Today, before I charge into the garden to do battle with pests, I take time to correctly define the problem and my action plan. What is the insect and is it harmful or beneficial? What is the plant’s susceptibility to damage? Is treatment needed? If so, what kind, when, and how? Gardeners call this Integrated Pest Management or IPM.

I’ve learned that removing one food source or habitat may disrupt the natural system, where even an insect pest contributes to the food chain. For now, I’ll continue to love my red twig dogwood both for bird food and its beautiful red stems in winter.
By Judy Lemanski, Extension Master GardenerSM Volunteer

Future Gardener Discovers a ‘Stick’
One morning I was sipping coffee on the patio and watching my three-year-old granddaughter pluck leaves off a nearby bush.  “Gramma, Gramma.  Come here quick,” she cried.  “Look at the stick.  Look at the stick.”  I couldn’t figure out what she was talking about.  Then I saw it!  A praying mantis, perched on a stem of the shrub and looking just like a stick!  Maddie watched with amazement as it rubbed a front leg across its face, cocked its head, and then slowly crawled away!  And I captured the teaching moment to tell my granddaughter (who hated bugs) all about the importance of good bugs in the garden.  It was “just a stick,” but it led my little future gardener on scavenger hunts, searching for more bugs and making up stories about their lives in the garden.
Beth Leonard, Extension Master GardenerSM Volunteer