Spring gardening brings lots of planting and along with it, mulching. If you use mulch in your landscape, it needs replenishing every year. David Crouse, Extension Soil Scientist at North Carolina State University, notes that adding 1 to 3 inches of an organic mulch to your soil surface each year is one of the most important strategies you can use to improve your soil.

If you haven’t been mulching around your trees and shrubs, flowers, and vegetables before , consider starting as there are many benefits besides controlling weeds and making your yard look neater (see https://www.buncombemastergardener.org/what-why-mulching/
for a discussion of the many “pros” of mulching).

Which mulches are best for improving your soil?
Many of us in Buncombe County garden on clay soil and Crouse notes that “The best organic matter amendments for clay soils are pine bark (less than 1⁄2 inch in diameter) and composted leaf mold.”

Thus, Pine bark is an ideal mulch that doubles as a soil amendment over the longterm. Bark nuggets or “mini-nuggets” form an attractive mulch for many areas of the landscape and will help improve your clay soil over the years.

It is certainly a great idea to mulch with materials you have on hand, such as fall leaves, which will benefit from shredding before using as a mulch to prevent them from forming an unattractive, impenetrable mat that may actually keep water from reaching your plants. Shredding will speed leaves’ composting into leaf mold and enhance your soil texture.

Amendments that do not improve clay soil
Note that there are several organic materials also used as mulches that Crouse recommends against using as soil amendments because they don’t help improve clay soil: hardwood bark, pine straw, and wood chips.

Fall brings a flurry of homeowners and landscape companies adding mulch to trees and shrubs, perennial borders, annual flower beds, and vegetable gardens. At the same time, leaves are bagged or sucked up to be transported to some unknown end. Spring brings more mulching.

What is mulch?
Mulch is any organic or non-organic material you apply on the soil surface to enhance plants’ growing environment. Soil amendments differ from mulch because you dig or till them into the soil.

Why mulch?
In addition to reducing your gardening workload, properly applied mulch offers many benefits:

Bottom line
Enhance your landscape with proper mulching. You can create a richer and more efficient landscape using mulches! 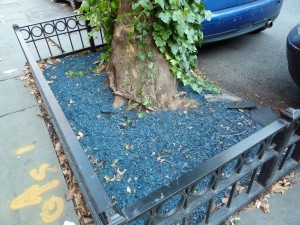