Q: I received a potted amaryllis bulb as a gift last week. It has two flower stems that have been growing more than an inch a day. I’m excited but wondering what do I do after it finishes blooming? 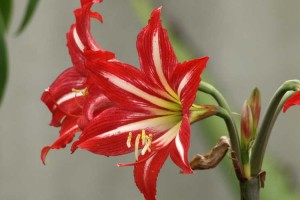 A: Sounds like you’re doing things right so far. Bright sun is good at this point to keep the stems from stretching. If you turn the pot every day or two it will help to keep the stems straighter. Keeping the temperature not more than 70 degrees and not over-watering will also help to keep the stem shorter. Once the flowers open you can move it out of direct sun and to a cooler spot so the bloom will last longer.

After the flowers have faded remove the flower stems, but leave the leaves to grow. Put the amaryllis back into sunlight. Give it a little house plant fertilizer to allow the bulb to recharge its battery. During the summer the plant will enjoy being outside in dappled sunshine like it would have in its native South American tropics.

About the end of August you start the whole cycle over again by letting the plant go dormant. Leave the bulb in the pot but move it to a cool location and stop watering. The leaves will gradually turn brown and it will go into a resting phase for a couple of months.

As you’ve discovered, the amaryllis needs to be awakened six weeks or so before you want the blooms. So in early November bring it out of dormancy by standing the pot in a pan of water to rehydrate the soil. Than place it in bright light and start the regimen you’re following now. 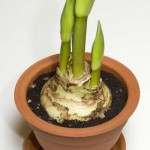 In a few years the bulb will grow and use up most of the space in the pot. When repotting, choose a container that leaves a gap of about an inch between the bulb, and the pot and plant it so that about half the bulb is exposed.